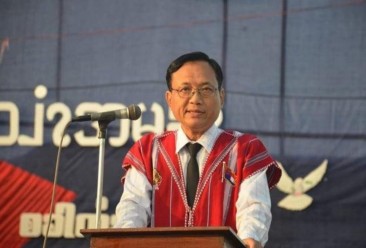 As the son of the late KNU leader General Saw Bo Mya, Saw Nerdah Mya has been a part of the Karen struggle his entire life. In January, however, he lost his position as commander-in-chief of the KNDO over an incident involving the killing of 25 construction workers in May of last year.

By forming the Kawthoolei Army as a response to his removal, Saw Nerdah Mya has once again raised the issue of the cohesiveness of the KNU, which has faced a number of serious splits in the past.

To learn more about the group’s stance on this latest challenge to its unity, Myanmar Now spoke to KNU spokesperson Padoh Saw Taw Nee about what it will mean for the organisation, and for the ongoing conflict in KNU territory, going forward.

Myanmar Now: On Wednesday, the KNU released a statement saying that it wouldn’t recognise the Kawthoolei Army. Can you elaborate on why this decision was made?

Padoh Saw Taw Nee: It’s clear as day why we can’t recognise them. We are an armed organisation, but we are trying our best to follow the democratic path as much as possible. We are constantly striving to meet international standards.

We’ve made our organisation into one that can stand tall in the international community. We are also aiming to be a part of the security forces when we finally build a federal union. We’ve already made preparations for that. For that reason alone, we cannot recognise them.

A soldier needs to follow the rules of his army. Any action done in violation of these rules cannot be tolerated. We can’t aim to just fight the current enemy. Instead, we have to strive to be a good army that will help to build a better society in the future.

If we fail to do so, even after we’ve won against the enemy, our country will descend into chaos again. That’s why we place such a high value on discipline. We tried to discipline Saw Nerdah Mya, but we couldn’t, so there’s nothing more we can do but go our separate ways.

Brig-Gen Saw Nerdah Mya has been removed from the organisation, but will any other action be taken against him?

We have cut off our relationship with him, so there is nothing left for us to do. But we will try our best to prevent conflicts in the future. We have made an important decision to fight against the common enemy first, in solidarity.

Will this have any impact on the revolutionary activities done under the leadership of the KNU?

What I can say for sure is that it will have no effect on our organisation. We have operated under the same policies for years and several groups have left in the past because they couldn’t abide by these policies. We can’t go soft on them, as we need to uphold our policies. There were, are and always will be misunderstandings and disputes within the organisation, but we must never go against our policies. Even if the people change, the policies never will.

We can’t achieve federal democracy as long as there is any kind of dictatorship ruling over the country, or as long as the 2008 Constitution remains in place. We need to abolish both.

First, we need to take down the dictatorship. We will remove everyone responsible for the coup from their positions. That is our primary goal right now. For this reason, again, we can’t change our policies. We will continue to fight the way we always have. The public doesn’t need to worry or have doubts about our actions, as our policies are solid and strong. Our brothers will continue to fight hand-in-hand with the public.

A number of groups have left the KNU over the decades that it has been leading the Karen revolution. What do you think will happen next?

Many people have left the organisation because they couldn’t follow its policies. Many have left throughout our history because they wanted to do things their own way. And the public has seen what happened to all of them. Therefore, we don’t need to worry about what is going to happen next.

What’s really important is that we need to take down the dictatorship. We will continue fighting no matter how hard it gets. We’ve already come this far in just over a year, which has never happened before.

We’ve never had as much public support as we have now. This is a big opportunity for us. Therefore, the public can trust us to continue fighting with only one goal in mind. It’s hard to say what’s going to happen next, I know, but we have all made up our minds that we must win this fight.

When the Democratic Karen Buddhist Army and the KNU/KNLA-Peace Council broke away from the KNU in the past, it benefited the junta. Do you think the formation of the Kawthoolei Army could have the same effect?

No kind of falling out is ever good. We’ve learnt the hard way that once you’ve fallen out, it’s very hard to reconcile with each other. The KNU has had a lot of experience with this. It’s hard, but it’s not new. We’ve had many subgroups that have gone their own way over the years—groups in the Ayeyarwady delta region and in the Bago Yoma hills. But at least these groups have held onto their strong policies.

The left-leaning groups are upholding their leftist policies firmly and the same can be said about the right-leaning groups. However, the ones that left us to form new groups after 1995 were different. We still can’t reconcile with them even now. Those have been the worst splits.

However, we don’t have anything to be sad about. The KNU has faced several generations of dictatorships, and we firmly believe that we can overcome this one, as it is the weakest one so far.

It is said that the Kawthoolei Army will be based in KNU Brigade 6 territory. Do you think this will create territorial conflicts?

We can’t say there won’t be any, can we? Now that we are two separate groups, we will have to come to a common understanding. However, we can’t, for any reason, reunite with them, due to our policies. But there are plans to work in collaboration in order to face the common enemy.

Does that mean that the two groups will be joining forces in on-the-ground combat?

We will have to find ways to fight the common enemy while causing the least amount of conflict among ourselves. There could be differences in our political opinions, and our policies, but we will try our best to work together in on-the-ground situations.

Some People’s Defence Force (PDF) groups are fighting alongside the KNLA, and some are following Saw Nerdah Mya. Have you discussed this situation with the civilian National Unity Government (NUG)?

We are regularly in touch with the NUG, as we are also a member of the National Unity Consultative Council, so we have to have regular conversations and discussions with each other. We have talked about the PDFs in our territories, especially the ones in the Oo Ka Yit Hta area. PDFs are found in many of our territories, from Taungoo in Bago Region to Myeik and Dawei in the south. Therefore, there’s no way we can’t talk about them with the NUG. We can’t fight the common enemy without talking with each other.

Will the formation of the Kawthoolei Army have any impact on the region?

There will definitely be some changes. However, their areas of operation are in Brigade 6 and 7 territories, where the KNU authorities are very good at handling matters like this.

Some have criticised the KNU for signing the Nationwide Ceasefire Agreement (NCA) with the military [in 2015]. What is your response to that criticism?

The public needs to examine our position carefully. Our organisation is based on solid policies. We firmly believe that political matters must be handled through political means. That’s why we signed the NCA with the military after holding political talks, despite the agreement having multiple flaws.

[After the coup], despite having signed the NCA, we couldn’t just stand by and do nothing as the military terrorised the country. We have no reason to negotiate with such an armed force. That’s why we have been fighting against the dictatorship from the start. The public needs to understand that we are not taking orders from the military council.

One thing I’m worried about is that some people will actually start to believe [that we are cooperating with the junta]. We’ve had to fight nearly 6,000 battles in just one and a half years. It’s as clear as day that we aren’t under the military council’s chain of command. I would like to ask the public to see that.

What else would the KNU like to communicate to the public?

We have faced many problems like this in the past, and we are genuinely saddened that this situation has happened again, but I would like to tell the public that we are an organisation with strong and solid policies, so we can withstand this falling out.

The second thing I would like to say is that we are heartened by the fact that the entire country is wholeheartedly supporting and donating to us.

At the same time, I would like to urge the public to be careful about who they give their money to. It’s important to make sure that it isn’t going to harmful organisations. Groups that don’t have genuinely good intentions can make the country descend into chaos again after we have established a federal union. Therefore, donors need to watch who they’re donating to.