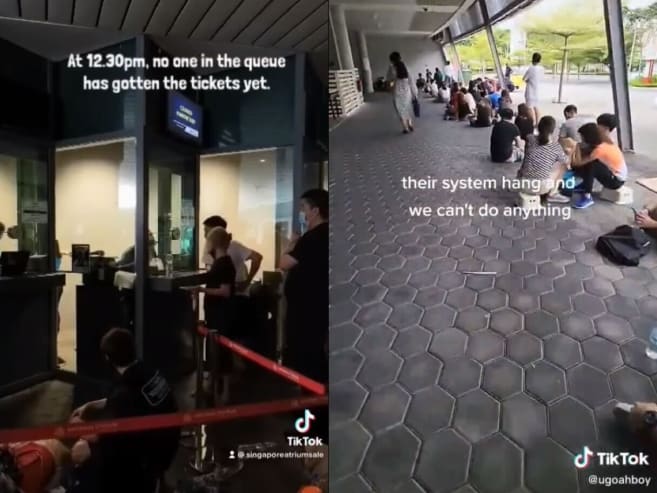 The organiser of the Singapore leg of the Jay Chou Carnival World Tour has apologised to fans who faced a frustrating wait for tickets, some even for hours. The Mandopop prince will return to perform in Singapore for the first time in two years this December.

Tickets went on sale at 10am on Thursday (May 5), online and at the Singapore Sports Hub, with priority booking reserved for OCBC cardmembers.

A video shared on the Facebook page Singapore Atrium Sale reported that there were snaking queues from 8am at the Sports Hub, but as of 12.30pm no one had gotten their hands on tickets, purportedly because of a “system glitch”.

A woman was also seen ticking off counter staff.

Fans are queuing at Sports Hub ticket office hoping to get tickets for Jay Chou’s concert but teportedly, no one has managed to get any tickets as at 12.30pm.

Thanks to friends of our page for sharing.

Posted by Singapore Atrium Sale on Wednesday, May 4, 2022

A TikTok user also shared a video of the long lines, claiming that there was no movement for four hours. “Their system hang and we can’t do anything,” the user said.

There was not much better luck for those hoping to score tickets via the Ticketek website. Fans had to be placed in a virtual queue before being redirected to the main website. Some reported getting error messages such as a “504 Gateway Time-out”, causing them to lose their spot and have to rejoin the queue.

“Have been trying since 10am from Malaysia. (Kept) in the queue for for 8 hours. Disappointed,” wrote one person.

“We are ready but the website is not ready! I reached payment page but keep getting error,” said another.

A few also claimed to have been charged but had no tickets issued.

“I experienced a variety of errors from my cards being declined, to timeouts, to the screen not even loading and getting stuck,” one fan Ang Kaiwen told CNA Lifestyle. He tried buying tickets online from 9am to 11.30am and eventually had to settle for tickets that were not his first choice.

Multiple listings for the tickets have also begun appearing on Carousell, with one listing jacking up the price for seats closest to the stage from S$392 to S$750. These prime tickets have been sold out on Ticketek.

The concert organiser released a statement on Facebook late Thursday afternoon that Ticketek was “facing technical issues and we had to slow down sales so as to resolve these issues”. “You might experience having to wait and we are doing our best to transact as many bookings as possible. We would like to thank fans for your support and patience and are very sorry,” G.H.Y Culture & Media wrote.

It also said ticket sales have resumed, although the apology post attracted similar complaints about a glitchy experience.

“The website is the same, still lousy unable to cart out!! I have been trying since 8+ in the morning,” one fan commented at 7pm on Thursday.

Another quipped: “It happens every time there is a Jay Chou concert, nobody foresee that?”

To Jay Chou Fans , we are very sorry for your experience while trying to purchase tickets to Jay Chou Carnival World…

The Taiwanese superstar is scheduled to perform for two nights at the Singapore National Stadium on Dec 17 and 18.