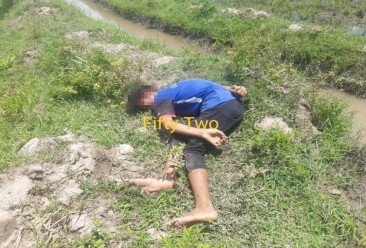 Three people, including an 88-year-old woman, were killed by regime forces during raids on two villages in Sagaing Region’s Khin-U Township on Wednesday, according to local sources.

The woman, a resident of the village of Letpan Hla, died after a fire set by soldiers spread to her home, the leader of the village’s defence team told Myanmar Now.

The fire was started at a nearby house where the soldiers had reportedly found 10m kyat ($5,450) worth of weapons and ammunition, he added.

“They seized the materials and torched the house, and the old woman’s house also burned down,” said Lae Yine, the defence team leader.

Another victim, 35-year-old Tin Moe Win, was tortured before being killed, according to Lae Yine.

“They cut through each cheek, tearing his mouth open on both sides. He also had two bullet wounds—one in his pelvis and another in his head,” he said.

Junta troops arrived at Letpan Hla at around 5am on Wednesday. In addition to torching several houses, they also burned down the village clinic and barns used to store crops, residents said.

At around 2pm the same day, the soldiers moved on to the neighbouring village of Laung Shay, where they captured two youths. One was able to escape, but the other, 18-year-old Thein Zaw Aung, was tortured and murdered, a member of a local defence force told Myanmar Now.

“One got away, but the other one was shot in the head and the chest,” said the defence force member, adding that the one who fled managed to do so when the regime forces came under attack with weaponised drones.

Residents of the two villages said that the soldiers who conducted the raids were not in uniform or driving military vehicles.

On social media, the regime claimed that 17 handmade rifles, 50 improvised explosive devices, and 50 grenades were seized during the raids. No mention was made of the killings or the arson attacks.

According to the latest figures released by independent think tank ISP Myanmar, the military has destroyed a total of 28,491 houses and other structures since launching counteroffensives against resistance groups in the wake of last year’s coup.

Of these, some 20,485 were in Sagaing Region alone, the group said, adding that religious buildings and hand-dug oil wells were among the structures that had been destroyed.