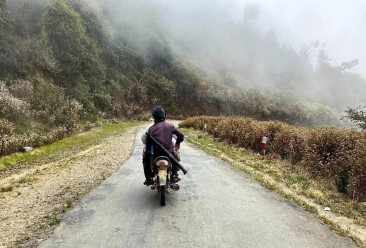 The shell landed in M’dat, a village about 15km away, at around 8am, hitting two houses and injuring two of their occupants, the sources said.

The victims, a 40-year-old woman and an 11-year-old child, both sustained serious injuries. The child’s leg had to be amputated, while the woman was said to be receiving treatment under the healthcare program of the local people’s administration team.

Salai Ha Om, the spokesperson for the Mindat branch of the Chinland Defence Force (CDF), said the regime forces in Mindat often fire heavy artillery into the surrounding countryside.

“They’re always shooting at the villages around here, deliberately targeting civilians. This is not so different from genocide,” he said.

Earlier this year, a 13-year-old boy was killed by an artillery shell while he and his family were attempting to flee junta troops approaching their village in Mindat Township.

The area around Mindat has seen frequent clashes in recent weeks, according to CDF Mindat, which claims to have control of most of the township outside of its administrative centre.

The group said that it killed two junta soldiers during a half-hour battle on Monday. Myanmar Now was unable to independently confirm this claim.

Salai Ha Om said the fighting began after the group launched an attack as a “warning” to the regime not to reopen schools as a step towards establishing administrative control.

“If the schools reopen, CDF Mindat will take serious action against them. The more they try to take on the role of government, the more we will attack them,” he said.

On May 13, the junta declared martial law in Mindat following a major clash with local CDF forces. The group has also been attacking military supply convoys travelling to Matupi Township.

Anti-regime groups in Chin State say they have their own plans to form a government and will continue to resist the junta with whatever weapons they can find.