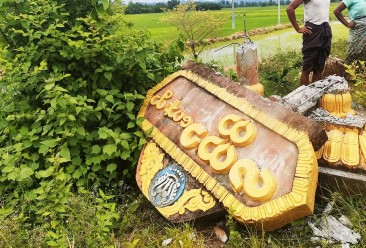 A woman and a child were killed and at least 10 other civilians were injured during heavy shelling by junta forces near Mrauk-U in northern Rakhine State on Sunday, according to local sources.

The shelling began at around 5pm after fighting broke out between the Myanmar military and the Arakan Army (AA) near Let Ker, a village some 12km north of Mrauk-U, the sources said.

Most of the victims were in Kin Seik, a village about 4km west of Mrauk-U, but two monks at monasteries in the town also reportedly sustained minor injuries.

Aye Yaing Nu, 60, and Myat Thu Lin, 4, were killed by shells that landed on Kin Seik as its inhabitants were attempting to flee, residents of the village told Myanmar Now.

Myat Thu Lin’s mother was among eight villagers who suffered serious injuries in the attack, according to the child’s uncle.

“She was hit while running with him in her arms. Shells were raining down on the village and they were trying to get away. Now the child is dead and she is in the hospital,” he said.

Other residents said the junta army appeared to be deliberately targeting the village.

“All of their shells fell right inside the village. Everyone is still running in a panic,” said a local woman who did not want to be named.

According to the woman, junta forces also raided the village three months ago, forcing most of those living there to flee.

Residents said they believed Kin Seik had been targeted because the military suspected that there were AA forces inside the village.

The shelling began after a junta column travelling south from Kyauktaw on the Yangon-Sittwe highway was hit near Let Ker by explosives laid by AA forces.

As the two sides clashed, regime soldiers stationed in nearby villages opened fire with heavy artillery, sources in the area told Myanmar Now.

“They just started shelling other villages for no reason at all,” said one Mrauk-U local.

People living along the Yangon-Sittwe highway have also reported seeing more reinforcements heading towards Mrauk-U from Kyauktaw in recent days.

Meanwhile, clashes have continued in Maungdaw Township, west of Mrauk-U, since AA forces attacked a junta base there last Friday.

Sources in the northern part of the township, near the Bangladesh border, reported heavy fighting on Sunday morning, followed by airstrikes by regime forces in the afternoon.

“Three aircraft—a fighter jet and two military helicopters—started firing at the Letpan and Wai La hills at around 3pm and then left about an hour later,” said one local, referring to an area near the border.

The military has also been using heavy artillery against AA forces in the area. On Saturday, a woman was killed by a shell that landed in the village of Min Gyi.

As fighting continues in Maungdaw and Mrauk-U, as well as in southern Chin State’s Paletwa Township, there have also been reports of growing tensions in the northern Rakhine townships of Buthidaung and Rathedaung.

In Bangladesh, local news outlets have reported that a number of artillery shells fired by the Myanmar military have landed in Bangladeshi territory in recent days.

The country’s border security forces have been put on high alert, the media reports said