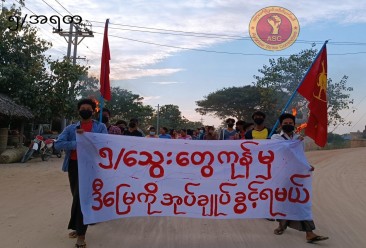 Workers who hail from areas that have seen strong resistance to last year’s coup are being forced out of their jobs in Yangon, according to labour groups.

The groups claim that since late July, factories in the city’s industrial zones have come under pressure from Myanmar’s military junta to fire workers from Sagaing, Magway, and Mandalay regions and Karenni (Kayah) State.

According to a member of the central executive committee of the Industrial Workers Federation of Myanmar (IWFM), a number of factories have already started firing workers on the basis of where their national identification cards were issued.

“Workers are told when they go to collect their salaries that they no longer have to come to work. They are also denied compensation,” the IWFM executive member said.

An employee of the Myanmar Lucky Fortune garment factory, one of the companies accused of unfairly terminating workers at the behest of the regime, said that four workers were fired there on Thursday because they were from Sagaing or Magway.

“They were summoned and ordered to show their ID cards. They were then told that the government had ordered them to go home because of the political situation,” said the worker.

He added that the Chinese-owned factory employs around 1,000 people, of whom roughly a third are from Sagaing or Magway.

“They’ve made plans to fire them all, and it’s not just this factory where this is going on. It’s happening in almost every factory,” he said.

To make matters worse, he added, landlords in Hlaing Tharyar and Shwepyithar townships, where many of the factories are located, have also become wary of renting to anyone whose ID card indicates that they are from a conflict area.

“Some hostels no longer want to rent rooms to those workers anymore due to all the rumours,” he said.

Since the coup, the situation of most factory workers in Yangon has become increasingly precarious. Like the four who were fired on Thursday, a growing number have been forced to work on a daily-wage basis, making them more susceptible to exploitation and arbitrary termination.

According to the Confederation of Trade Unions, Myanmar (CTUM), many companies have been accused of withholding overtime pay, even as workers are expected to put in longer hours to reach higher production targets.

Employees are also routinely subjected to physical or verbal abuse by their supervisors amid a lack of oversight and a general deterioration of the economy under military rule, according to the CTUM.

A report released by the International Labour Organization (ILO) on Monday indicated that Myanmar has shed more than a million jobs over the past two years. It also noted worsening working conditions.

“The quality of jobs is under serious strain. Labour conditions are tenuous for many workers with severe incursions of labour rights,” the report said.

“In the garment industry, increasing reports show workers in precarious employment including casual or daily labour, irregular working hours and workers receiving lower pay. Entitlements such as severance pay when workers are terminated are also often not granted,” it added.