A Yangon MP from the Mingalar Taung Nyunt township said that if anyone is found assembling in Kandawgyi Park in contravention of COVID-19 regulations, the park will be closed.

Images of crowds of people relaxing in downtown Mahabandoola Park went viral on social media, prompting the authorities to temporarily close it down on December 7.

Even though Kandawgyi Park’s regional government has not yet issued similar instructions, more people have already been spotted walking and exercising in the park. According to U Yan Aung, the park is now under strict surveillance to prevent overcrowding and will be shut down if necessary. 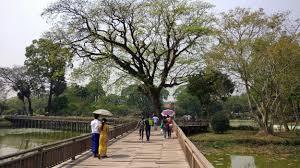 Kandawgyi has yet to see a horde of people.” The government is keeping an eye on some people as they exercise. We will close it if necessary, but we haven’t received any orders yet,” he said.

As a matter of fact, on December 6, the Deputy Mayor of Yangon and his team visited Kandawgyi and met with township officials to discuss ways to disperse the crowds there.

People in the Yangon Region, which has the highest number of cases in Myanmar, are concerned that the virus will spread among the large crowds.